DENVER (AP) — Will Barton put his best foot forward in a return from a toe injury.

Barton had 15 points and 10 rebounds while leading Denver's resurgent transition game and the Nuggets pulled away in the second half to beat the Miami Heat 109-89 Tuesday night.

"I think Will, when he's locked in and focused like he's playing right now, he gives you a lot of positives on both ends of the floor," Nuggets coach Michael Malone said.

Jamal Murray had 21 points and Jerami Grant also had 15 for the Nuggets, the first team this season to hold Miami under 100 points.

Jimmy Butler had 16 points on 3-of-12 shooting while being guarded mostly by Barton. Kelly Olynyk added 13 points for Miami, which was outshot from the floor by the Nuggets 52.3 percent to 36.4 percent.

"I was in a good place before this injury and I feel like I'm pretty much back there," said Barton, who missed the previous two games. "I was a little rusty tonight, a little winded. I had a couple of unnecessary turnovers."

When he was in, he was spearheading the Nuggets defense, hitting the boards and helping to lead the team's fast break.

"That's when I'm at my best, when I'm getting defensive rebounds and then going down and finishing and putting pressure on the defense," he said.

Miami coach Erik Spoelstra said the Nuggets seemed to be a step ahead of the Heat throughout much of the game.

"They were the aggressors," he said. "We weren't able to impose our will for any long stretches of the game defensively and you could see that early on with allowing 30 points in the paint. They played well and it wasn't really a competitive game in the second half."

Up by 10 at halftime, the Nuggets doubled their lead with a strong third quarter in which they outscored the Heat 31-20 despite losing Paul Millsap to a facial laceration early in the period after Gary Harris left near the end of the second quarter with an ankle injury.

Monte Morris converted a three-point play in the final moments of the third, helping the Nuggets take an 89-68 lead into the fourth. Morris finished with 11 points.

Denver scored eight of the next nine points starting the final quarter, capped by Torrey Craig's dunk off a lob pass from Nikola Jokic to move in front 97-70 with 8:58 left to play.

Bam Adebayo's driving layup broke the Nuggets' surge but not enough to alter the outcome for the Heat, who had trailed by a point after the first quarter. Denver substituted freely in the final minutes.

The Nuggets closed the last 5:04 of the second quarter on a 16-5 run to take a 58-48 lead at halftime. Barton began the flurry by converting a go-ahead three-point play and also connected on a 3-pointer during the surge. 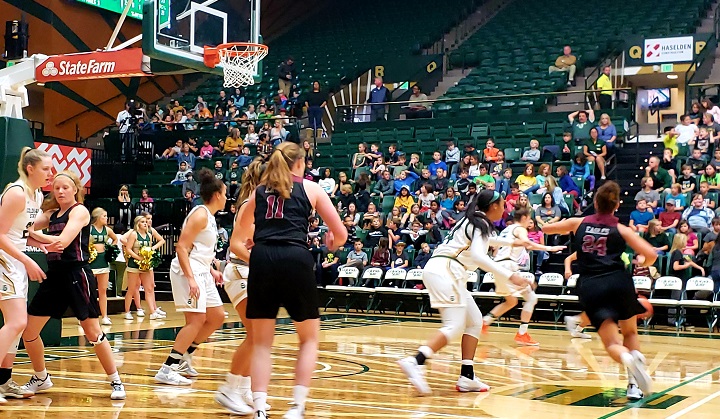 Since it was an exhibition game, the loss does not count against the Eagles record, but the Rams are now 1-0.

Due to a technical foul before the game began, Chadron State's Taryn Foxen hit a free throw before the opening tip to give the Eagles a 1-0 lead. The Rams scored the next 11 points and led the rest of the game.

Foxen led the Eagles with 18 points and had a team high three assists.

Five different players scored in double-digits for the Rams. Annie Brady, Lore Devos and Liah Davis each had 12 points, while Katie Stamatelopoulos and Jamie Bonnarens each had 10. Brady had a game high nine rebounds and Stamatelopoulos led both teams with five assists. 59 of the Rams points were scored by their bench.

The Eagles actual season begins this Friday at home, as they host Texas A&M International at 3 p.m. in the Chicoine Center