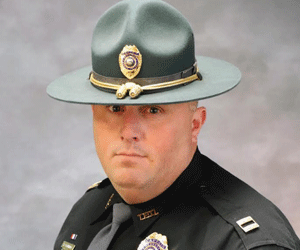 The Nebraska State Patrol (NSP) announces the promotion of Trooper Tyler Schmidt to the position of Troop D Captain. Schmidt will be commander for NSP operations for the 27 counties of Troop D, based in North Platte.

“Tyler Schmidt brings a broad leadership background in both the private and public sectors to this important position,” said Colonel John Bolduc, Superintendent of the Nebraska State Patrol. “His systems thinking and people-centered approach will be invaluable to the men and women of Troop D.”

Schmidt, 43, is in his 21st year of law enforcement service, the last nine of which have been with NSP. Prior to joining the Nebraska State Patrol, Schmidt served in the Nebraska Air National Guard 155th Security Police Squadron, the University of Nebraska – Lincoln Police Department, and the Lancaster County Sheriff’s Office. He has also worked as the Quality Director for Phelps Memorial Health Center in Holdrege.

“The men and women of Troop D are phenomenal public servants,” said Captain Schmidt. “I’m proud to have spent my entire NSP career in Troop D and look forward to continuing to serve in this new role alongside our dedicated troopers and civilians.”

In his career with NSP, Captain Schmidt has served in the Patrol Division, Carrier Enforcement, and Investigative Services. He has served as a Drug Recognition Expert and instructor for defensive tactics and firearms. Schmidt holds a Bachelor’s Degree from the University of Bellevue and is a graduate of the 220th Session of the FBI National Academy.

Troop D is comprised of 27 counties in North Central through Southwest Nebraska and is headquartered in North Platte. 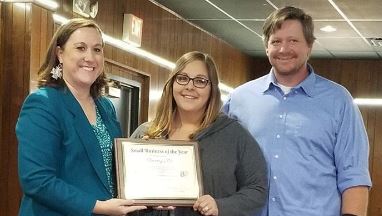 The 33rd Annual Box Butte County Development Corporation Membership Meeting and Awards Luncheon was held Nov. 6 at the West Side Center in Alliance. The West Side Event center prepared a prime rib sandhwich meal for all attendees.

"Entrepreneur of the Year" was awarded to the partnership of Russ Finch (Greenhouse in the Snow) and Allen Bright (Antioch Machine) on their collaboration of manufacturing and the export of the Greenhouse kits to the world.

"Large Business of the Year" was awarded to Farmers Co-Op of Hemingford for their new grain silo expansion project that will better serve their members and patrons.

"Small Business of the Year" was awarded to Brewery 719.

"Tourism Partner of the Year" was a new award for the annual meeting this year. That was awarded to Friends of Carhenge for their 'Kites Over Carhenge' event held this fall.

Dawn Butcher, Dustin Chester, and Blanche Randolph were newly elected to the BBDC board of directors.

"Thank you to the board, our partners, members, my staff and my family for making my 9th year as Executive Director a success," said Herian. "I couldn't do what I do without you. Let's celebrate what Box Butte County has to offer!"