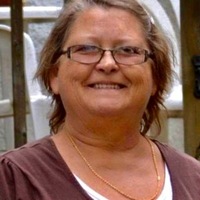 Joanne Rutledge (O’Brien) Johnson passed away surrounded by her family. She was raised up on eagle’s wings Saturday, November 9th, 2019.

Joanne was born on January 30th, 1948, to Claude and Betty Lou O’Brien in Alliance, Nebraska. She grew up with her five siblings on her family’s ranch southwest of Mullen, Nebraska.

Joanne was proud to be one of the first female engineers in Alliance. She enjoyed her work and would often say to others, “Have fun at work!” Joanne retired from Burlington Northern Santa Fe Railroad after 30 years of service.

She was a beloved mother and grandmother who enjoyed her kids, grandkids and great-grandkids and will be remembered for her devotion to her family. Joanne loved being with her family whether it was out camping and fishing at the lake, at home for holiday gatherings, or attending her grandchildren’s school activities and events.

Graveside services will be held Friday, November 15th, 2019 at 11:00 at Eclipse Cemetery, south of Mullen, Nebraska. Pastor Bob Teters will be officiating with

Mullen Funeral Home in charge of the arrangements. Online condolences can be left at www.govierbrothers.com.