CHADRON, Neb. -- November 14, 2019 -- The Chadron State College football team will wrap up its season Saturday at home with a special challenge. The Eagles will host what apparently is one of the best NCAA Division II teams in the nation--Colorado School of Mines. The finale will kick off at noon.

At 10-0 the mighty Orediggers are one of 11 undefeated teams in the division and have not been challenged by most of their opponents. They are ranked seventh in this week's American Football Coaches Association poll and lead the Rocky Mountain Athletic Conference in virtually every important statistical category.

"This is our bowl game," said CSC Head Coach Jay Long. "We know they're a great team. We'll give it everything we've got and see what happens."

The Eagles are 6-4 for the season after winning five games in a row.

The Orediggers' closest game was last Saturday, when they topped Dixie State 35-27 by scoring what proved to be the winning touchdown midway through the fourth quarter. The Trailblazers finished with 447 yards of total offense and Mines with 403.

For the season, Mines has tallied 428 points and the opponents 146. Aside from the Dixie State game, the Orediggers' closest contest was their 34-14 decision over Colorado State-Pueblo on Sept. 21.

Chadron State is second to the Orediggers in the RMAC in three of the offensive categories--scoring offense (38.0 points), total offense (468.5) and first downs (24.3)--but is down a ways on most of the defensive listings.

"We've been playing better defense, but we know we'll have to play better than ever on Saturday if we're going to shut them down," said CSC Defensive Coordinator Craig Jersild. "They've got both a great running game and a great passing game. We're going to have our hands full, that's for sure."

The Orediggers generally prefer to run the ball.

During the first half of the season, they leaned on Cameron Mayberry, a 5-11, 210-pound senior who in 2018 led the RMAC in rushing with 1,584 yards (a 6.5 yard average) and 22 touchdowns. He was going strong again the first half of this season, gaining 636 yards through five games for a 6.0-yard per carry average and eight TDs.

But Mayberry was injured early in the second quarter of the sixth game. His replacement, Michael Zeman, a 5-11, 210 pound sophomore from Wheat Ridge, Colo., also has excelled.

A year ago, when the Orediggers were 10-1, losing only to Dixie State during the regular season, they brought in senior transfer Isaac Harker from Indiana State to play quarterback. He responded by completing 67.8 percent of his passes for 3,573 yards and 38 touchdowns in those 11 games.

"He's a true dual threat," Jersild said of Matocha. "He's a terrific runner and also throws lots of screen passes to lull you to sleep before throwing a long one over the top."

The Eagles also have a potent offense. Their 468.5-yard total offense average is the second highest in Chadron State annals. Quarterback Dalton Holst needs just 135 more yards to become the Eagles' first 3,000-yard passer in a season, but Offensive Coordinator Logan Masters said CSC has to be able to run the ball, too, on Saturday.

"They're (Mines) only giving up 51.8 yards a game on the ground to lead the nation, so we'll have to execute really well to get our rushing game going," Masters noted. "But we're going to try."

While the Eagles lead Mines 23-18 in the all-time series, the Orediggers have won the last six games in the rivalry. Last year's score was 49-20 in Golden. 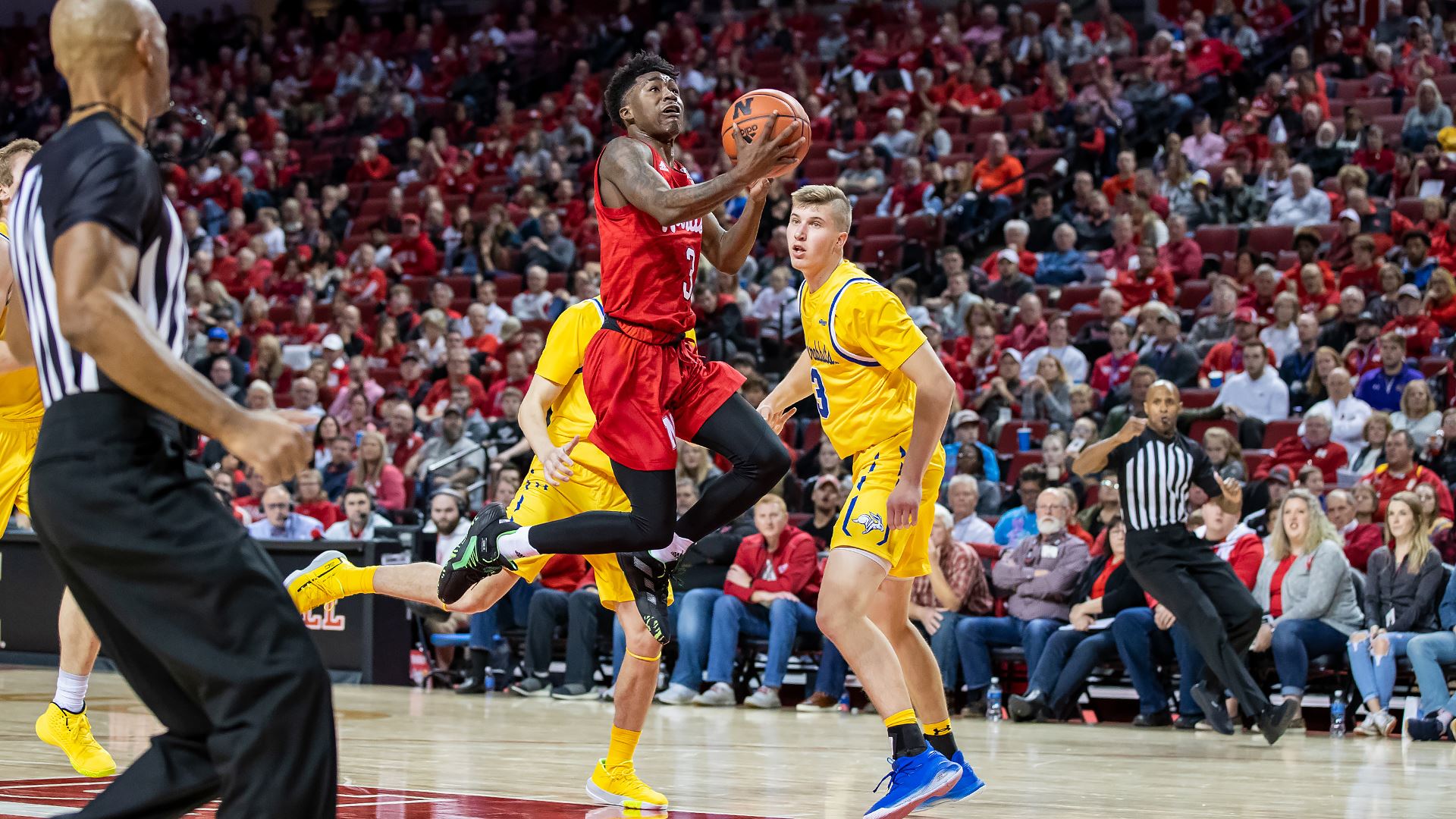 The victory improved NU's record to 1-2 and gave Head Coach Fred Hoiberg his first victory since taking over in Lincoln in April.

NU, which never trailed, used a strong first-half performance to take control, shooting 57 percent in leading by as 31 in the opening 20 minutes to take a 51-27 lead into the locker room.

The Huskers raced off to a 12-2 start, as Dachon Burke Jr. and Hannif Cheatham combined for nine early points for the Big Red, as both players finished with 17 markers. Kevin Cross was the fourth Husker to post double figures with 10 points on 4-of-5 shooting off the bench.

Douglas Wilson did all he could to keep his team within striking distance early, scoring the first six points of the contest for SDSU, and the visitors were within 26-14 before Nebraska blitz the Jackrabbits with a 19-2 spurt. NU held SDSU to one field goal over a five-minute span, as the Huskers took their largest lead of the half at 45-14 on a Yvan Ouedraogo putback to cap a run of 13 straight points.

Nebraska held the Jackrabbits to 27 percent shooting, including 1-of-13 from 3-point range in the first half. The Huskers placed three in double figures in the opening 20 minutes with 14 from Mack, 12 from Burke and 10 from Cheatham.

In the second half, SDSU was never able to cut the deficit to less than 17 points. The Jackrabbits were within 56-53 with 16:49 left, but Nebraska used 13-6 spurt as Cross scored six of 10 point off the bench to stretch the lead back to 30. From there, the Huskers were in control and never led by less than 17 points.

For the contest, the Huskers scored 16 points off of 13 Jackrabbit turnovers. Many of those turnovers led to fastbreak opportunities, and Nebraska capitalized, scoring 20 fastbreak points overall. Defensively, the Big Red held SDSU to 3-of-21 shooting (14.3 percent) from behind the arc.

Wilson turned in a strong performance in a losing effort, finishing with 15 points and a game-high 14 rebounds, as SDSU fell to 3-2 on the season with its second straight setback.

The Huskers return to action next Friday, Nov. 22, when the Huskers host Southern.