Lincoln -- Jervay Green and Ivan Ouedraogo combined for 12 points in overtime, as Nebraska rallied for an 93-86 win over Southern Friday night at Pinnacle Bank Arena.

Ouedraogo got the Huskers (2-2) going with two early baskets in the extra session, including a dunk which ignited a 10-0 spurt in the extra period, while Green hit a pair of 3-pointers to help the Huskers build a 10-point cushion and hold on. Nebraska went 4-of-5 from the floor in overtime.

Cam Mack totaled 16 points and eight assists, while Matej Kavas came off the bench with 10 points, including a trio of 3-pointers for the winners, as NU set season highs in both 3-pointers (12) and 3-point percentage (57.1),

The win overshadowed an outstanding performance from Southern's Micah Bradford, who led all scorers with 31 points, including 6-of-11 from 3-point range, before fouling out in overtime. Darius Williams also had a double-double with 14 points and 13 rebounds for the visitors.

Southern erased a 70-65 deficit and led 80-79 after a Williams basket with 33.9 seconds left and had two chances in the final seconds of regulation after Jervay Green's free throw tied it at 80 with 15.6 seconds left.

Bradford missed on a contested jumper, but the rebound was tipped and went out of bounds with 2.1 seconds left. Montese Blake's 3-point attempt was contested by Cam Mack and missed to force overtime where NU finally put the Jaguars away.

In the first half, the Huskers used their best 3-point shooting of the season to take a 40-38 lead into the break. The Huskers went 7-of-12 from 3-point range, as Kavas and Green combined for five 3-pointers for the Big Red.

Leading 20-17, the Huskers went on a 13-4 spurt behind the shooting of Kavas, who hit a trio of 3-pointer in the spurt, the last giving the Huskers its largest lead of the half at 33-20.

Southern came roaring back, using a 18-2 run behind the play of Bradford, who scored 10 of his 13 first-half points in the spurt, as the Jaguars led 38-35 after a trio of Ashante Shivers free throws with 1:13 left in the half. The lead would be short-lived, as Nebraska closed the half with five straight points.

Southern, which shot just 34 percent in the first half, hit its first five shots from the field, turning a 42-38 deficit into a 51-46 lead after a Lamarcus Lee basket with 15:23 left in regulation. The Jaguars eventually stretched the lead to eight points twice, the last being at 59-51 before the Husker bench keyed the comeback.

Thorir Thorbjarnarson came off the bench and drilled two straight 3-pointers as part of seven straight points, as the Huskers sliced the lead back to one. NU would eventually regain the lead at 62-61 on a Green free throw with 8:25 left.

The Huskers seemingly regained control with six unanswered points, turning a one-point deficit into a 70-65 lead after a Mack basket with 5:30 left, but the visitors responded with seven straight points of their own to take a 72-70 lead after Burns' basket with 4:08 remaining.

The Huskers return to action on Monday when they take on Washington State in the first round of the Cayman Islands Classic. 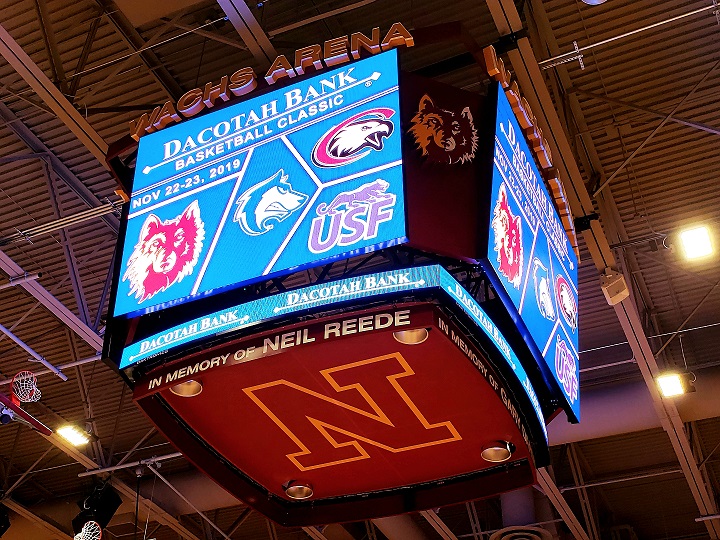 ABERDEEN, S.D. -- November 22, 2019 -- For the fourth time in four games this season, the Chadron State College men's basketball team made things close, but came out on the short end of the 62-59 decision while playing the University of Sioux Falls in the opening game of the Dacotah Bank Classic at Aberdeen, S.D. on Friday afternoon.

"We need to improve mentally," said CSC Head Men's Basketball Coach Houston Reed, "and we're still figuring out some things with our lineup. We have to be focused on team, first, and not on playing time and minutes."

"We feel totally different about our team if one possession goes our way in some of these games. We're not any different of a team either way, but we need to get a lot better."

The Eagles have now lost games by one and three points and another in overtime. Sioux Falls is 3-1.

The Eagles made their first two shots of the game and held a 9-4 lead before not scoring again for nearly 11 minutes. CSC Coach Houston Reed noted that at least five layups and/or short jumpers refused to drop for his team during the drought, which allowed Sioux Falls to go on a 19-0 run and take a 23-9 lead.

Chadron State was a different team in the second half, sinking seven of its 11 field goal attempts in the first nine minutes while cutting the Cougars' lead to 42-39 with 11 minutes remaining.

The Eagles never completely caught up but cut the difference 60-59 with 58 seconds left on a three-pointer by Brian Rodriguez and two free throws by Michael Sparks.

The Cougars' Chase Grinde closed out the scoring with an off-balance jumper with 30 seconds to play. Chadron State was called for a double dribble an instant later.

Sioux Fall left the door open for the Eagles to pull the game out of the fire by missing four consecutive free throws in the fleeting seconds. But CSC failed to connect on a three-pointer with nine seconds left and a length-of the court shot at the buzzer.

Austin Slater, a 6-9 junior, led Sioux Falls with 16 points and 13 rebounds. Grinde added 11 points and William Lybaek 10 for the Cougars.

Sparks, a senior guard, was 9-of-10 at the free throw line to pace the Eagles with 12 points. Both point guard Colby Jackson and alternate center Kenan Gray added 11 points. Rodriguez contributed nine points and a team-high nine rebounds.

The Eagles will tangle with the Northern State Wolves, the classic's host team, Saturday afternoon.