ABERDEEN, S.D. -- November 23, 2019 -- Chadron State sank seven of its first 10 field goal shots while building a 20-9 lead over the Northern State in the nine minutes of their men's basketball game Saturday afternoon in Aberdeen, S.D., but the host Wolves came on strong in the final stages and won a 70-59 decision.

Northern is now 4-2 while Chadron State remains winless after five starts, all on the road.

"We really just challenged our guys to show some toughness," Chadron State Head Men's Basketball Coach Houston Reed said. "We felt like if we really challenged them, we could get them out of their game. At halftime they made some adjustments, and in the second half, they were just better than we were."

The Wolves took the lead for keeps at 42-40 with 12:30 remaining. The margin was just 61-57 after CSC point guard Colby Jackson buried a 3-pointer with 2:30 left, but Northern tallied nine of the final 11 points.

The Eagles committed 23 turnovers which mirrors their season average to date, of 23.6 per game.

"Turnovers have been the telltale sign of our non-conference schedule so far," said Reed. "We have to take better care of the basketball. For the most part we did, but we were a little off-target with the pass, down the stretch. That's just going to come with some chemistry."

Chadron State will finally play its first home game of the season at 6 p.m. on Saturday, Nov. 30 against another Aberdeen team--the Presentation College Saints.

BILLINGS, Mont. – November 23, 2019 – The Chadron State College women's basketball team led early, gave up a 13-point lead, then nearly tied the game in the third quarter on Saturday against Montana State Billings. However the Yellowjackets were able to outscore the Eagles 33 to 17 in the paint on their home court, finishing with a 68-54 win over CSC.

"We lost momentum in a variety of situations," said CSC Head Women's Basketball Coach Janet Raymer. "The point swings would be five to seven at a time, but we kept fighting back. We couldn't get to the free throw line as much as I would've liked."

Chadron State hit its first two shots from the floor while holding Billings off the three-point line in two consecutive attempts, taking a 5-2 lead in the opening three minutes.

At that point, the Yellowjackets found their footing from the arc. Three different players hit from three as part of Billings' 19-3 run.

The Eagles' defense clamped down in the second period, holding Billings to only two field goals as they chipped into the hosts' lead. Melisa Kadic, who was 3-of-6 for CSC from long range, cut the MSUB lead to four with 30 seconds until halftime, but Danielle Zahn hit a last-second two-pointer to make it 29-23 Yellowjackets at the midpoint break.

Another dagger from three by Kadic in the third quarter made it 38-37 for Billings.

However, the Eagles were assailed at the free throw line in the fourth. Billings was 10-for-13 in the final 10 minutes from the charity stripe, while CSC took only four shots, as MSUB pulled away down the stretch.

"I'm really proud of our defensive efforts in the second quarter," said Raymer. "We gave up some points in transition in the first, which forced us to step up in the second. We did well on the boards and played aggressively on the offensive end. We're showing growth and fight."

Leading the Eagles with 16 points was Taryn Foxen, who put up 9 of the team's 13 points in the fourth quarter. Kadic each had a team-high six boards, and Jori Peters led CSC with four assists.

Hannah Collins was Billings' leading scorer with 22 points on 8-of-14 shooting from the floor and was 5-of-6 from the foul line. Taryn Shelley double-doubled with 10 points and 11 rebounds.

Chadron State travels to Fairbanks, Alaska next week, for games on three consecutive days beginning Thanksgiving Day, at the University of Alaska-Fairbanks. 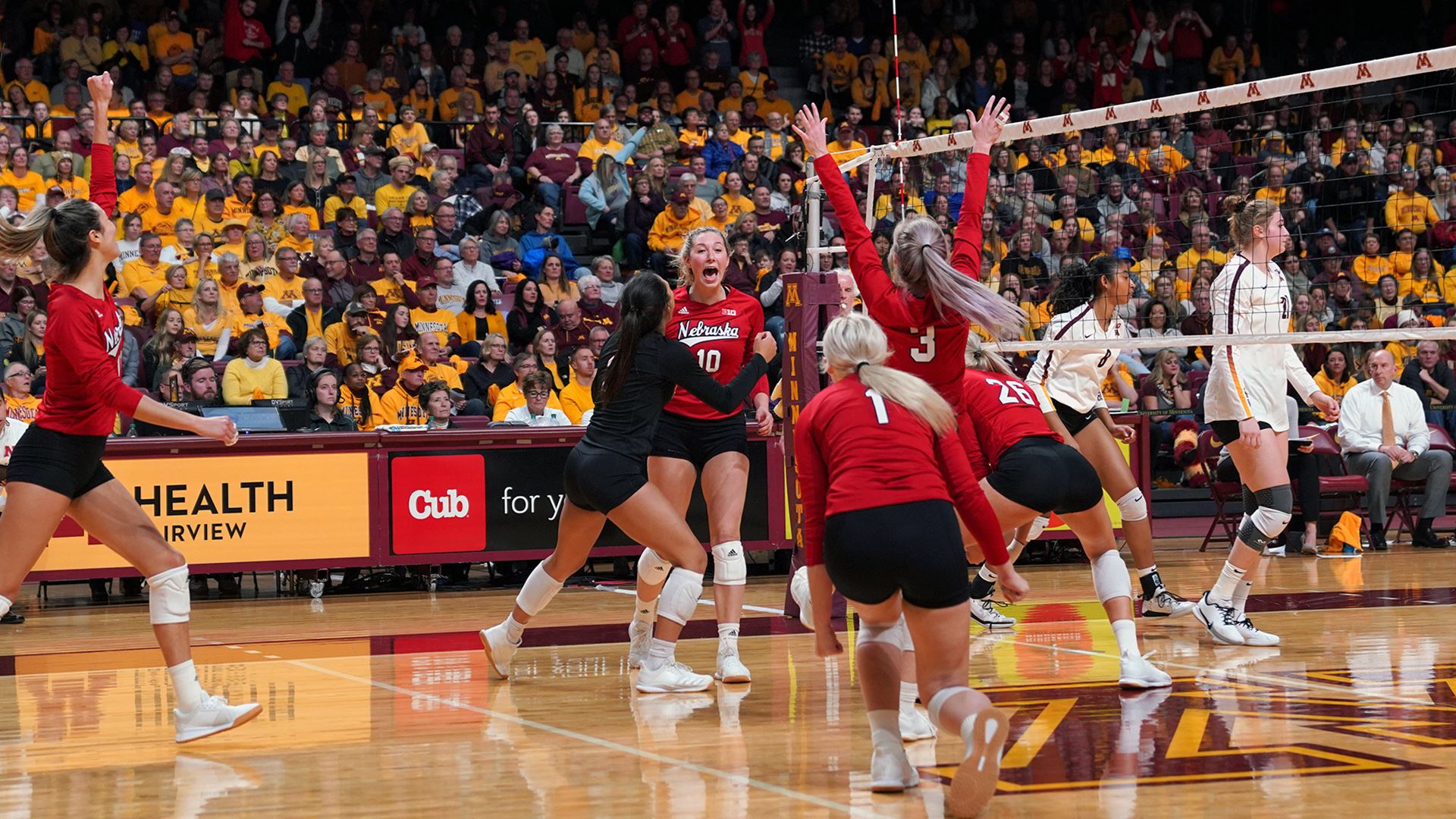 The Huskers (23-3, 15-2 Big Ten) won their seventh straight match and picked up their 25th straight win in the month of November dating back to 2016. The Huskers won for the first time at Minnesota since 2014, led by a heroic effort in set five that ended on an 11-0 Husker run.

Nicklin Hames had 56 assists and 15 digs. Kenzie Knuckles also had 15 digs. Megan Miller had 12 digs and three service aces, and she served the 11-0 run that ended the match.

NU had a season-high eight service aces, seven of which came in the first two sets. NU was out-blocked 13-8, but the Huskers had a 72-65 edge in digs and 67-56 advantage in kills. NU's eight aces were six more than Minnesota's two.

Nebraska's road trip continues at No. 5 Wisconsin on Sunday at 1:30 p.m. The match will be televised on BTN, streamed on FoxSports and can be heard on the Husker Sports Network. The Huskers are one game behind the league-leading Badgers in the conference standings with three matches to go.

Set 1: An ace by Hames and a pair of kills each by Kubik and Sweet helped the Huskers to a 6-4 lead. Schwarzenbach and Hames stuffed a Gopher attack, and NU led 10-5 after an ace by Hayley Densberger. Another block by Schwarzenbach, followed by kills from Kubik and Sweet, preceded back-to-back aces by Megan Miller that made it 16-11 Huskers and forced Minnesota's second timeout. Just as it did after its first timeout, Minnesota answered with a 3-0 run to pull within two, 16-14. Kubik sided out for the Huskers, and a kill by Stivrins and a Minnesota hitting error put NU back up by five, 19-14. The Huskers took their biggest lead of the set at 21-15 after kills by Sun and Kubik, but the Gophers scored three in a row to cut it in half, 21-18. Hames ended the run with a kill, but an NU service error and two blocks by Minnesota trimmed NU's lead to 22-21, but Sun and Sweet produced kills to earn set point at 24-22. Kubik put away her sixth kill from a cross-court bump set by Hames to end the set at 25-22.

Set 2: The Huskers used a 4-1 run to turn a 3-4 deficit into a 7-5 lead, sparked by back-to-back kills by Sun. Sun added another kill and back-to-back aces as NU went up 11-7. Sweet pounded another kill before Kubik won a joust at the net to put NU ahead 14-9. Stivrins solo blocked a Minnesota attack for a six-point lead at 16-10. Nebraska remained ahead by six, 21-15, after a kill by Sun and a service ace by the junior outside hitter. Kubik tacked on two more kills for set point at 24-18, and Stivrins finished it at 25-18. NU hit .385 in the second set.

Set 3: Minnesota scored the first three points of the set, and the Huskers could never draw even. The Golden Gophers took a 15-11 lead at the media timeout on a dump by setter Kylie Miller. After Minnesota went up 18-12, Schwarzenbach, Sun and Sweet terminated three kills in a row to pull NU within 18-15. But the Gophers came back with a 4-0 run of their own with three kills and a block, and Minnesota led 22-15. Following a Husker timeout, Sun posted a kill - the 1,000th of her career - and Schwarzenbach hammered an overpass as the Huskers cut it to 22-18. But Minnesota held on for the 25-19 win to extend the match, hitting .412 in the set.

Set 4: Minnesota got off to another strong start, taking a 6-1 lead. A Husker service error and hitting error increased Minnesota's lead to 14-6, and the Gophers went up by 11, 19-8, after two blocks and a kill by Pittman. Minnesota won the set, 25-11, to force a fifth.

Set 5: Nebraska held a 4-2 lead after Kubik and Stivrins terminated three kills in a row. After a Minnesota sideout, Sweet and Kubik added another pair of kills to make it 6-3 Nebraska. Following a Gopher timeout, Kubik and Stivrins stuffed a Minnesota shot, and the Gophers went in the net for an 8-3 Husker lead at the crossover. Kubik took over with three kills and a block with Stivrins, as the Huskers increased their lead to 13-3. Miller's 11-0 run to end the match continued with an ace, and Kubik sealed the victory with her 20th kill.