Lincoln - Nebraska buried a season-high 12 three-pointers, including a career-high-tying six from Taylor Kissinger, as the Huskers shot their way to an 83-79 win over Duke in the Big Ten/ACC Challenge at Pinnacle Bank Arena on Wednesday night.

With the victory, Nebraska improved to 8-1 on the season while the Blue Devils slipped to 6-3 overall. The Huskers handed Duke just its third loss in 13 games in the history of the Big Ten/ACC Challenge, with two of those losses coming to Nebraska at Pinnacle Bank Arena.

While Kissinger matched her career best with six threes by going 6-for-9 from long range to finish with a team-high 19 points, the junior from Minden, Neb., was far from the only Husker firing. The Big Red got 14 points on a perfect 5-for-5 shooting night from the field from sophomore Ashtyn Veerbeek. The 6-2 forward from Sioux Center, Iowa, matched her career high by burying all three of her three-pointers and finished another traditional three-point play for the Huskers.

Senior guard Hannah Whitish added a pair of three-pointers, while going 4-for-4 from the free throw line in the closing minute to help the Huskers seal the four-point win. They were Whitish's first free throw attempts of the season. 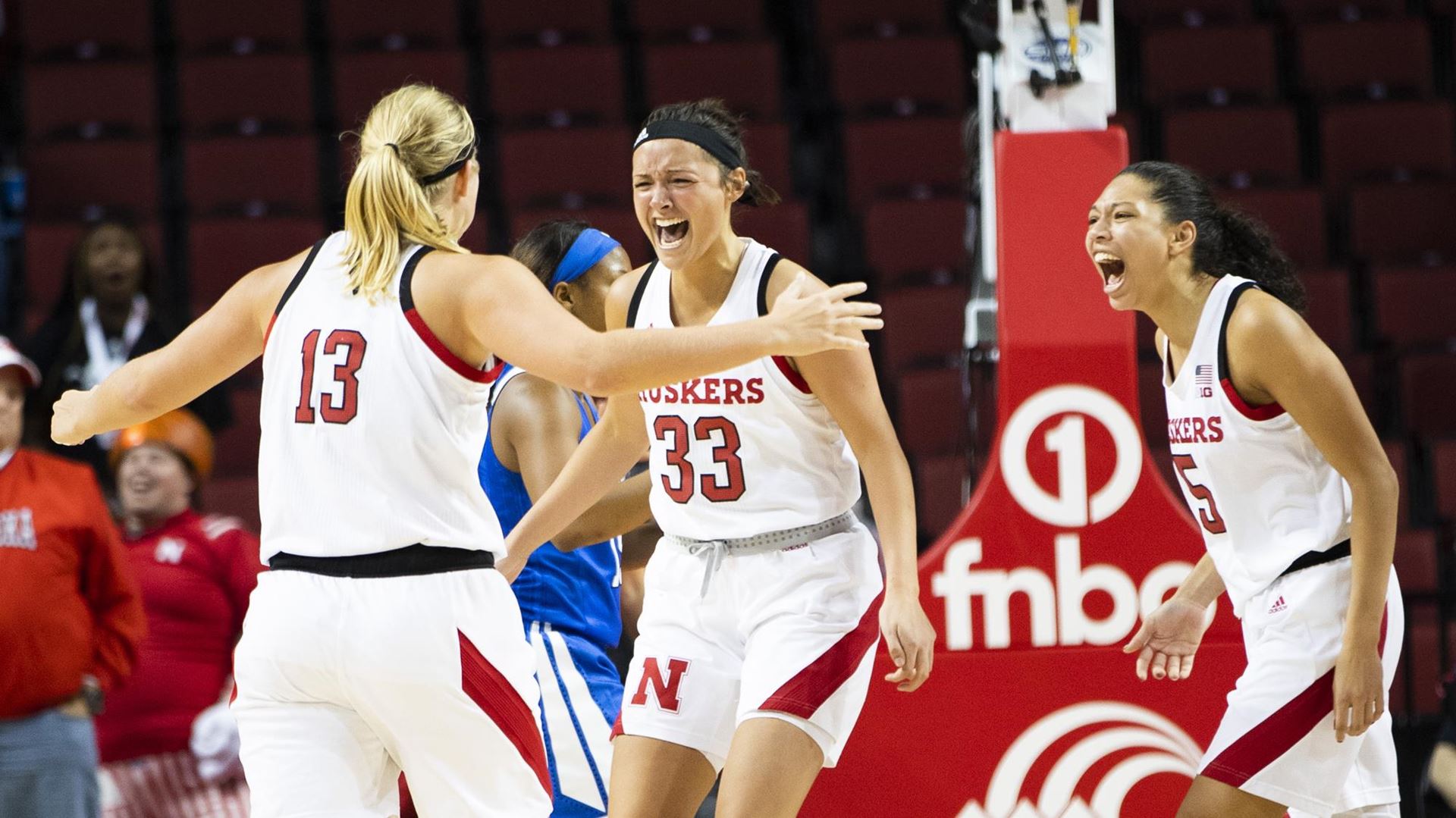 Early in the game, Whitish dished out three assists to become the first Husker in history to score 1,000 points, hit 200 threes and distribute 400 assists in a career. She added three more assists to finish the night with 403 in her career, moving past former Husker Stacy Imming (1984-87) into the No. 7 spot on the NU career list. The six assists were also a season high for Whitish.

Junior center Kate Cain added 10 points, five rebounds and five big blocks to go along with a pair of steals. Cain's block total pushed her to 207 in her career to match 2016 Olympic bronze medalist Danielle Page at No. 3 on the Nebraska career block chart.

The Huskers also got significant contributions from senior Nicea Eliely, sophomore Leigha Brown and freshman Isabelle Bourne. Eliely managed nine points on 4-of-5 shooting, while Brown pitched in eight points, including crucial free throws down the stretch, five rebounds and two steals including a huge hustle play to dive on the floor and secure a Husker possession in the closing minute.

As a team, Nebraska hit 48.3 percent (28-58) of its shots from the field, including a scorching 12-of-27 (.444) from three-point range. The Big Red also knocked down 15-of-20 free throws, including 9-of-10 in the fourth quarter to seal the win. The Huskers also dished out a season-high 23 assists, including six from Whitish, five from Sam Haiby, four from Kissinger, three from Brown and three more from Eliely.

The Huskers worked their way to a 21-20 lead at the end of the first quarter, knocking down 4-of-12 threes to overcome 9-of-14 overall shooting by Duke in the quarter. The Huskers outworked the Blue Devils on the boards 12-6 in the opening quarter, including seven offensive rebounds.

The Big Red caught fire two minutes into the second quarter, overcoming a 25-21 Duke lead on a three by Veerbeek and two more by Kissinger to claim a 34-30 edge and force a Duke timeout with 6:05 left in the half. Veerbeek added a jumper to make it 36-30. Later in the quarter, Whitish buried a three to give Nebraska the biggest lead of the game at 47-37 with 3:07 left in the half.

Duke rallied late in the quarter, but the Huskers took a 49-45 lead to the halftime locker room. At the half, Nebraska was winning on the glass, 19-14 and had allowed just three offensive boards to the Blue Devils who had hit a scalding hot 19-of-31 field goals, including 4-of-8 threes.

Duke bolted out of the locker room early in the second half to take a 51-49 lead. The game remained a possession game for the rest of the quarter, but Nebraska got the final three points of the period to take a 65-62 lead to the fourth.

Nebraska never relinquished the lead in the fourth, although Duke pulled within one point on multiple occasions, the last coming at 76-75 with 1:19 left. The Huskers' last seven points came at the free throw line, beginning with one from Eliely before Brown hit a pair and Whitish hit the final four to seal the win.

The Huskers survived despite giving up 16 offensive rebounds in the second half, primarily because of Nebraska's tighter grip on the Blue Devil shooters. Duke went 0-for-9 from three-point range in the second half and just 14-of-37 overall from the field after halftime.

Nebraska will enjoy nine days off from competition before returning to the court to take on Oral Roberts on Saturday, Dec. 14 at Pinnacle Bank Arena.