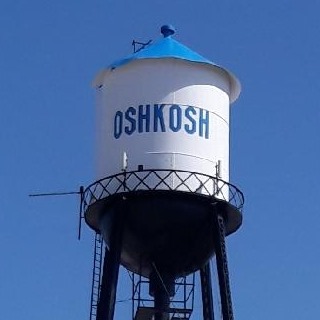 Lincoln - Proudly standing 120-feet tall, the Oshkosh Water Tower has been an iconic landmark in Garden County since 1920. Like a lighthouse to the plains, its welcoming presence can be seen from miles away. History Nebraska is pleased to announce that the tower has been listed in the National Register of Historic Places, nearly 100 years after its construction. This designation recognizes the importance the tower has in the development of Oshkosh from a village to a prosperous community.

The tower is in excellent condition and is a classic example of a “tin-man” type elevated tower. These “tin-man” water towers were once standard across rural Nebraska communities, but are quickly disappearing as new technologies take hold. Even though the tower was retired as a water delivery system in 2018, the residents of Oshkosh banded together to save this landmark. According to the Tin Man from the Wizard of Oz, “A heart is not judged by how much you love; but how much you are loved by others”—this is certainly true of Oshkosh’s very-own “tin-man.”

David Calease with History Nebraska’s Preservation Office feels that this is a special nomination. “If you can take yourself back to roughly 1920, think of the importance of running water to a community. Not all towns had it, and those that did were setting themselves up for future growth. For Oshkosh, the building of the water tower is an example of the planning and development that the community envisioned. Right after the water tower was completed there was a period of substantial economic growth in the community.

Calease also says that this listing highlights the diversity of historic places on the National Register. "What I really like about this nomination is that it shows the versatility of the National Register program – it’s not just big buildings and fancy houses – we have historic resources all across the state, in nearly every community.”