LINCOLN, Neb. - The No. 6 Nebraska volleyball team advanced to the second round of the NCAA Tournament after a 25-13, 25-18, 25-10 sweep of Ball State in front of a crowd of 8,204 at the Bob Devaney Sports Center on Friday night. The Huskers (26-4) advanced to Saturday's NCAA Second Round matchup with Missouri at 7 p.m. The Tigers defeated Northern Iowa, 3-0, in Friday's other first-round match.

Led by All-Big Ten setter Nicklin Hames and its three All-Big Ten attackers, Nebraska hit .425 in the match, its second highest mark of the season. The Huskers committed a season-low eight attack errors and were not blocked for the first time in a match in more than five years. Hames dished out 34 assists while running a balanced offense as Nebraska (45 kills) had nearly twice as many kills as Ball State (23).

Madi Kubik, the Big Ten Freshman of the Year, had an impressive postseason debut, as she had 11 kills on 16 error-free swings to hit a career-high .688 in the first NCAA Tournament match of her career. Lauren Stivrins had 11 kills on .667 hitting out of the middle, while Lexi Sun put down nine kills on 21 swings and hit .333. Combined, the Huskers' three all-conference attackers - Kubik, Stivrins and Sun - totaled 31 kills while committing only three errors.

Defensively, Nebraska limited Ball State (20-12) to a season-low .010 attack percentage, the only time in 32 matches this season the Cardinals hit below .120. Kenzie Knuckles had a match-high 13 digs in her NCAA Tournament debut, while Stivrins had five blocks and Hames had four stuffs, one shy of her career high. Sydnee VanBeek led Ball State with eight kills.

Nebraska and Missouri, which will be meeting in the second round in Lincoln for the second year in a row, will have a 7 p.m. start on Saturday on NET, BTN+ and the Husker Sports Network. 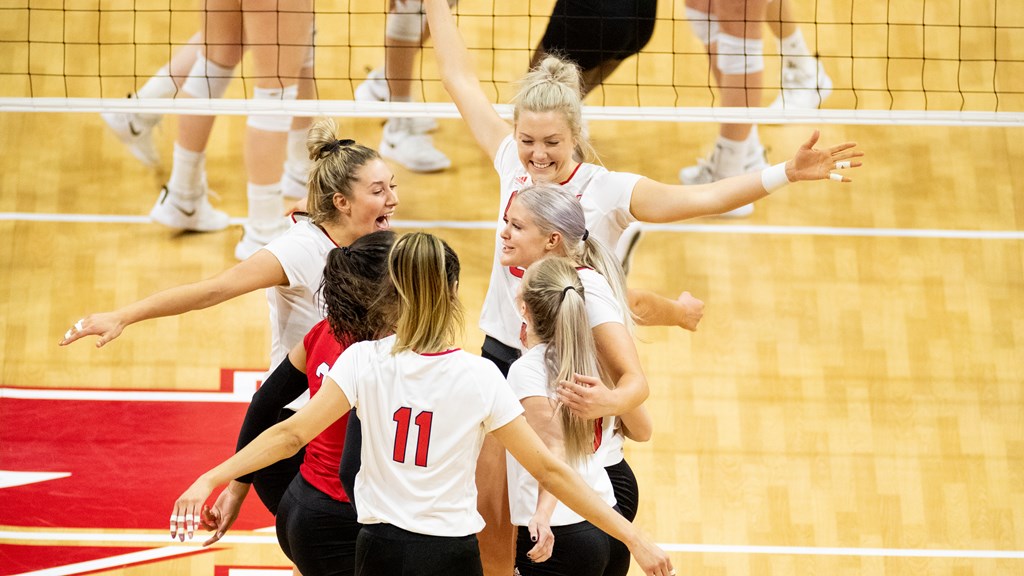 Set 2: NU rallied from down 7-5 to take a 9-7 lead after a 4-0 run sparked by a Stivrins kill and block. Hayley Densberger served an ace before a Kubik kill made it 12-8, and a pair of attacking errors by the Cardinals preceded a kill by Stivrins as the Huskers went up 18-12. Ball State got within four at 19-15, but the Huskers closed out the 25-18 win with Stivrins, Kubik and Sun posting kills down the stretch.

Set 3: Ball State had to burn a timeout after Nebraska started the set on a 6-1 run. Sweet and Kubik each had a pair of kills to get the Huskers going. Hames sparked a six-point spurt with a kill, and Kubik and Stivrins tacked on three more as Nebraska went up 17-5 on a block by Sun and Schwarzenbach. Kubik's 10th kill of the match put NU up 21-10, and Stivrins and Hames posted a block before another Kubik kill increased the lead to 23-10. Stivrins and Kubik teamed up for another block, and Miller ended the match with an ace.