HOUSTON (AP) - Rookie Drew Lock threw for 309 yards and three touchdowns and Kareem Jackson had an interception and returned a fumble 70 yards for a touchdown against his former team . The Denver Broncos built a huge first-half lead and coasted to a 38-24 win over the Houston Texans. Lock made his NFL debut in a win over the Chargers last week. He threw for 235 yards with three TDs in the first half for the most yards passing in a first half by the Broncos since Peyton Manning had 282 in Week 5 of 2014.

The San Francisco 49ers have regained control of the top seed in the NFC after earning a wild shootout win over the Saints in New Orleans Robbie Gould kicked a 30-yard field goal as time expired to complete the Niners' 48-46 victory over the Saints. Jimmy Garoppolo's clutch completion to tight end George Kittle for a 39-yard gain, along with a defensive facemask penalty on fourth-and-2 from the San Francisco 33, helped set up Gould's winning kick. Garoppolo passed for 349 yards and four touchdowns as the 49ers improved to 11-2, one game ahead of the Packers, Saints and Seahawks. Niners receiver Emmanuel Sanders had a 75-yard touchdown and added his second-career scoring toss after taking a handoff on a reverse. The Saints took their last lead on Drew Brees' fifth touchdown pass of the game, an 18-yarder to Tre'Quan Smith with 53 seconds left.

Meanwhile, the Niners regained sole possession of the NFC West lead with Seattle's 28-12 loss to the Rams. Jared Goff passed for 293 yards and two touchdowns as Los Angeles improved to 8-5 and increased its playoff chances. Todd Gurley ran for 79 yards and a fourth-quarter TD to help the Rams end the Seahawks' five-game winning streak.

The 9-4 Chiefs clinched the AFC West as Patrick Mahomes completed 26 of his 40 passes for 283 yards and a touchdown in a 23-16 victory over the Patriots. Tom Brady was under pressure all game and finished 19 of 36 for 169 yards, a touchdown and interception. The game was in doubt until Bashaud Breeland knocked away Brady's fourth-down pass attempt to Julian Edelman in the end zone, ending New England's 21-game home winning streak.

Lamar Jackson threw three touchdown passes and the 11-2 Ravens secured their second consecutive playoff with a 24-17 win over the 9-4 Bills. Jackson finished 16 of 25 for 143 yards and appeared to seal the game by hitting Willie Snead for a four-yard TD to put Baltimore ahead, 24-9 with 9:49 left. Facing fourth-and-8 at Baltimore's 16, Josh Allen's pass over the middle was broken up by Marcus Peters at the goal line to secure the win.

Diontae Johnson ran for an 85-yard touchdown on a punt return and caught a pass for another score to lead the Steelers past the Cardinals, 23-17. Joe Haden had two of the Steelers' three interceptions in the second half as Pittsburgh won for the seventh time in eight games to bolster its playoff hopes. Rookie free agent quarterback Devlin Hodges completed 16 of 19 passes for 152 yards and a touchdown in his third career start for the Steelers.

Aaron Jones rushed for a season-high 134 yards and a touchdown on just 16 carries as the Packers held off the Redskins, 20-15. Jones had his third 100-yard rushing game of the season and hauled in six catches for 58 yards as Green Bay improved to 10-3 to stay one game ahead of the Vikings atop the NFC North. Washington's Adrian Peterson became just the sixth back in NFL history to reach the 14,000-yard mark, running for 76 yards and a score.

Danielle Hunter had three of Minnesota's five sacks in a 20-7 victory against the Lions. Kirk Cousins passed for 242 yards and a touchdown. Dalvin Cook had 75 yards from scrimmage and a rushing score on 20 touches over three quarters as the Vikings moved to 9-4 while handing Detroit its sixth consecutive loss.

The Texans share the AFC South lead with Tennessee after Ryan Tannehill threw for 391 yards and three touchdowns in the Titans' fourth straight win, 42-21 versus the Raiders. Derrick Henry ran for two scores and the Titans bounced back from a deflected interception on the opening drive to score TDs on five of their next seven possessions. Henry rushed for 103 yards and broke a 21-all tie with a 10-yard TD run midway through the third quarter.

Nick Chubb produced 99 of his 106 yards rushing after halftime as the Browns dumped the Bengals, 27-19 to stay in the AFC playoff hunt at 6-7. Denzel Ward returned an interception 61 yards for Cleveland's first score. Baker Mayfield and Kareem Hunt had rushing touchdowns to help the Browns overcome Joe Mixon's career-high 146 yards rushing and a touchdown.

Jameis Winston threw for 456 yards and four touchdowns in guiding the Buccaneers to a 38-35 triumph over the sputtering Colts. Winston overcame three more interceptions and having one returned for a TD for the fifth time season, wiping out a 14-point, second-half deficit. Jacoby Brissett completed 19 of 36 passes for 251 yards, two TDs and no interceptions for Indianapolis, which is 6-7 following its fifth loss in six games.

Philip Rivers threw for 314 yards and three touchdowns, including an 84-yarder to Austin Ekeler in the Chargers's 45-10 trouncing of the Jaguars. The Chargers scored on four of five possessions in the first half to take a 24-3 into the locker room. It was Jacksonville's fifth consecutive lopsided loss, all by at least 17 points.

Matt Ryan threw the longest touchdown pass of his career and became the 10th quarterback in NFL history to reach 50,000 yards passing while guiding the Falcons' 40-20 thumping of the Panthers. Ryan finished off Carolina with a 93-yard touchdown pass to little-used Olamide Zaccheaus in the third quarter. The Panthers were officially eliminated from playoff contention with their fifth straight loss and first under interim coach Perry Fewell.

Miami erased a 16-6 deficit before Sam Ficken kicked a 44-yard field goal as time expired to give the Jets a 22-21 comeback victory over the Dolphins. The winning drive was prolonged after officials overturned a non-call for pass interference. San Darnold finished 20 of 36 for 270 yards, including touchdowns to Demaryius Thomas and Robby Anderson. 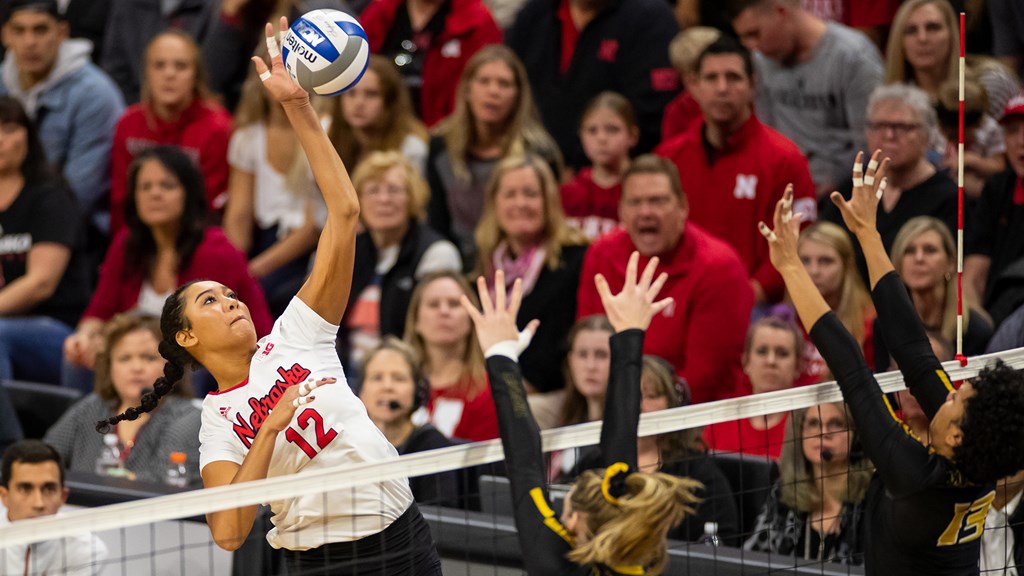 LINCOLN, Neb. - The Nebraska volleyball team reached its eighth straight NCAA Regional with a 3-1 win over Missouri in the second round of the NCAA Tournament at the Bob Devaney Sports Center on Saturday night.

The sixth-ranked Huskers rallied after dropping the first set, coming back for a 20-25, 25-20, 32-30, 25-18 win in front of a crowd of 8,091 in the final home match of the season. Nebraska, the No. 5 seed in the NCAA Tournament, will head to Madison, Wisconsin for regionals and will meet No. 12 Hawaii in the regional semifinal next Friday. The No. 4 Badgers will host No. 13 Texas A&M in the other regional semifinal in Madison.

Jazz Sweet had a big night to power the Huskers into their NCAA-record 35th regional appearance. Sweet led Nebraska with 17 kills, her most ever in an NCAA Tournament match and one shy of her career high overall. Sweet also tied her career high with six blocks and added four digs, two shy of her career high. Lexi Sun (13 kills), Madi Kubik (11) and Lauren Stivrins (11) also had double-figure kills for the Big Red. Nebraska committed nine errors and hit .000 in the first set but had only 10 errors while hitting .350 over the final three sets. The Huskers hit .267 overall in the match. Nicklin Hames dished out 42 assists and had 12 digs, while Kubik also had a double-double with 10 digs to go along with her 11 kills.

Defensively, Nebraska out-blocked Missouri 13-6 and out-dug the Tigers, 59-53. The Huskers were also strong at the service line with seven aces against only three errors, with Hames and Megan Miller each serving up three aces.

Leketor Member-Meneh led Missouri with a match-high 19 kills to pace three Tigers in double-figure kills. The Tigers ended their season with a 22-8 record, while Nebraska improved to 27-4.

Set 1: Sweet began the set with a block and two kills, and Kubik had a block and an ace as the Huskers claimed a 7-5 lead. But Missouri rallied with a 4-0 run to take a 9-7 lead and force a Husker timeout. Schwarzenbach and Sun struck kills and then teamed up for a block before Hames served an ace to restore a 12-10 lead. But the Tigers answered again with two blocks and a kill and two Husker errors, and Nebraska needed another timeout as it trailed 15-12. Missouri's run continued with two more unforced Husker hitting errors, and the 7-0 run had Mizzou up 17-12 before a service error ended it. Tyanna Omazic had back-to-back kills to make it 20-13 Missouri, but Sweet posted a kill and a solo block, and Miller served back-to-back aces to pull the Big Red within 21-18 and force a Mizzou timeout. NU ended up cutting it to two at 22-20, but the Tigers scored the final three points, including back-to-back aces by Omazic to end the set, 25-20. Nebraska hit .000 in set one with nine attacking errors, while Missouri hit .212.

Set 2: NU came out of the gates with a 5-1 run, keyed by another Miller ace and two kills by Kubik. The Huskers led 9-4 after a kill by Sun, but Missouri ripped off four straight points to get within 9-8, but Sweet recorded two kills in a row to make it 12-9 Huskers. Stivrins had a pair of kills, and Sun had another as NU went up 18-14. Missouri responded with a pair of kills and an ace to get within 18-17, but Sweet sandwiched a pair of kills around one by Stivrins to put NU up 22-18. Stivrins terminated on the slide to earn set point at 24-20, and Nebraska evened the match with a 25-20 win. Nebraska out-hit Missouri .400 to .345 in the set.

Set 3: Missouri ripped off a 7-1 run to take a 10-4 advantage. Back-to-back solo blocks by Hames and Sun started a 10-1 Husker run in which the Huskers posted five blocks. Schwarzenbach combined for three of them, and Sun gave NU a 12-11 lead with two straight kills. Hames served an ace, and a block by Sun and Schwarzenbach made it 14-11. Sweet, Schwarzenbach and Kubik tacked on kills for a 19-15 advantage, and the lead went to five, 22-17, after an ace by Hames. The Huskers earned set point at 24-20, but Missouri scored five points in a row to take a 25-24 lead. Sweet answered with a clutch kill to tie it at 25-25, and Kubik tipped one for another Husker set point, 26-25. The teams traded points to a 27-27 tie, when Member-Meneh terminated a kill for set point for Missouri at 28-27. A service error tied the score again at 28-28, and Member-Meneh and Kubik traded kills to make it 29-29. Sun put NU on top, 30-29, and the Huskers stayed ahead 31-30 after a Missouri service error. Sweet and Schwarzenbach produced a block to end the thriller at 32-20. It was the Huskers' sixth block of the set. Nebraska had seven set points, while Missouri had three chances to win it.

Set 4: Nebraska took an 8-4 lead after back-to-back blocks by Stivrins, one with Sweet and one with Kubik, part of a 5-0 run. Missouri sliced the deficit to one at 13-12, but Sun terminated back-to-back rallies, and Sweet continued her phenomenal match with two more kills to take Nebraska to an 18-13 lead. Two straight kills by Kubik and one each by Stivrins and Sweet made it 23-15 Nebraska after a 5-0 spurt, and the Huskers advanced to regionals with a 25-18 win.