The murder of an Army scout, the Cheyenne’s run through the buttes after fleeing Fort Robinson, and railroad camps and tent cities that boomed with the coming of the railroad all share one thing: geography.

Northwest Nebraska is rich in history; the story of the West unfolds in Dawes and Sioux counties, from Native American heritage to the era of fur-traders and homesteaders. Nearly three dozen historical markers serve provide historical context for the people and places that shaped Northwest Nebraska.

Before the West was carved up by homesteaders and the free range fenced, Native American tribes walked the land of Northwest Nebraska and during the fur-trade era, many conducted business with the traders. James Bordeaux opened his Indian trading house in the mid-1840s near what is today the Museum of the Fur Trade. Bordeaux’s trading house was once attached by Crow warriors, who were eventually driven off by friendly Sioux Indians. He traded the Indians’ buffalo robes, furs and ponies for guns, powder, blankets and whiskey for nearly three decades in Northwest Nebraska. 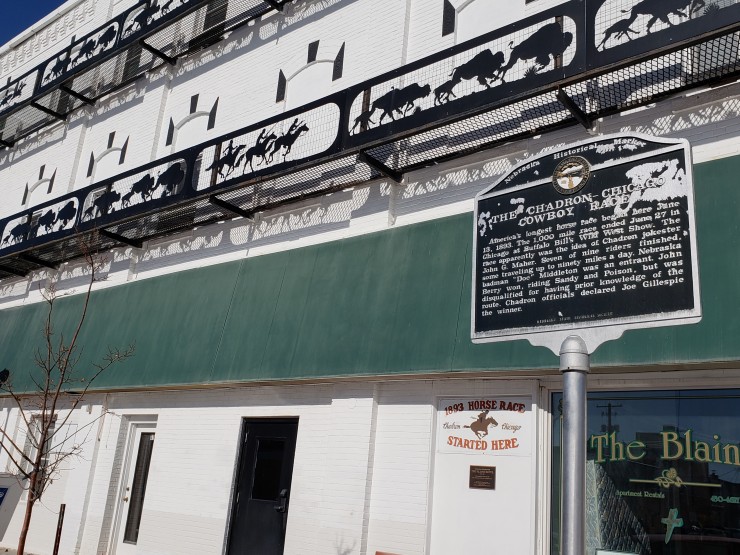 But as westward expansion surged, disputes over land erupted. In September 1875, the Allison Commission met with thousands of Sioux Indians under a lone cottonwood tree near present-day Whitney. The commission members hoped to convince the Native Americans to part with the Black Hills, but negotiations failed. While the Council Tree or Treaty Tree died decades ago, its general location is still marked along Old Highway 20.

The story of the Native American people continued in Northwest Nebraska as more settlers arrived, the military established outposts and tribes were assigned to dedicated “agencies,” where they were to live. A few years after the Allison Commission failed in its negotiations, a band of Cheyenne, led by Dull Knife, fled a reservation in Oklahoma, seeking to return to their homeland in Wyoming and Montana. Nearly 150 of the Cheyenne were captured and imprisoned at Fort Robinson, refusing to return to Oklahoma. In January 1879, several of the younger Cheyenne Warriors used smuggled weapons and broke out of the barracks, fighting a running battle across the Fort’s parade ground, eventually reaching the White River, scaling the nearby cliffs and escaping. The Cheyenne evaded troops for 12 days but were discovered hiding along Antelope Creek Jan. 22. The outbreak resulted in the deaths of 64 Cheyenne and 11 soldiers.

Other Native Americans worked with the military, such as Baptiste “Little Bat” Garnier, who served as Chief of the Fort Robinson Scouts. Garnier’s father was French-Canadian, but he was raised among his mother’s Sioux people, earning a reputation as one of the best interpreters and big game hunters in the Rocky Mountain Region of the Nebraska Territory, according to “Fifty Years on the Old Frontier” by James Cook. Little Bat took part in General George Crook’s Black Hills Expedition, worked as a scout with Col. Merritt’s 5th Cavalry and was acting as a military interpreter during Wounded Knee when fighting broke out. 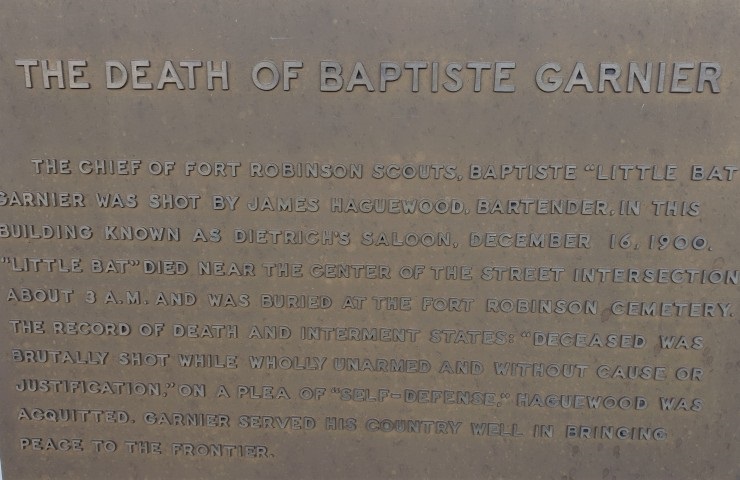 He was shot and killed Dec. 16, 1900, in a Crawford saloon by local bartender James Haguewood. After being shot, Little Bat stumbled into the street and was taken into a nearby building, where he died, Cook wrote in his book. His life and death are paid tribute with a plaque on the side of what is today known as the Corner Bar, where the fatal shot was fired. Haguewood was acquitted on a plea of self-defense.

Little Bat’s death and interment records read that he was “brutally shot while wholly unarmed and without cause or justification.”

The City of Crawford itself is recognized with a historical marker, having its start as a tent city in 1886. Named after a soldier at Fort Robinson, the town served as an important supply depot for the military outpost, and a center of entertainment for the soldiers stationed there. The historical marker telling the city’s story is located at the site of the Visitor’s Center at the junction of Highways 2/71 and 20.

Crawford isn’t alone in its historic status; the village of Harrison is also recognized with an official state marker. Originally established as a railroad camp in 1884, the town was initially named Summit thanks to its elevation of 4,876 feet. It remains the highest town in the state today.

Just west of Harrison was the Coffee Siding. Cattle ranching was king in Northwest Nebraska, and one of the largest cattle barons, Charles Coffee, constructed a railroad siding between Harrison and Lusk in order to ship cattle to Chicago and avoid Wyoming’s higher freight charges. Agriculture remains a key industry in Northwest Nebraska but trucks have taken over what was once the railroad’s domain.

The complete list of Northwest Nebraska’s historical markers can be found at http://discovernwnebraska.com/museums/.