Nikola Jokic scored 26 of his 33 points in the second half, including the winning basket with 7.9 seconds left, and the Denver Nuggets defeated the Dallas Mavericks 107-106. Jokic was coming off a career-high 47 points Monday in a win over Atlanta. Luka Doncic led Dallas with 27 points, 10 assists and nine rebounds. The Mavericks played their fifth straight game without Kristaps Porzingis, who has a sore right knee.

The Denver Nuggets are spending at least one more day atop the NBA’s Northwest Division after pulling out a victory in Dallas.

Nikola Jokic scored 21 of his 33 points in the third quarter and furnished the winning basket with 7.9 seconds left as the Nuggets rallied past the Mavericks, 107-106. He shot 8-for-11 in the third period, including 4-for-6 from 3-point range. Jokic got hot after being shut out in the first quarter.

Jeremi Grant finished with 15 points and Jamal Murray added 14 to help Denver improve to 26-11, the second-best record in the Western Conference.

The Nuggets swarmed Luka Doncic  on the Mavericks’ final possession, forcing him to pass the ball. Doncic fell one rebound shy of a triple-double, contributing 27 points and 10 assists.

Giannis Antetokounmpo’s had 30 points and 12 rebounds led Milwaukee to a 107-98 win over the Warriors. Antetokounmpo notched his league-leading 32nd double-double after continuing to deal with a sore back. Khris Middleton added 21 points, seven rebounds and six assists as Milwaukee improved to a league-best 33-6 while bouncing back from Monday’s loss to San Antonio.

DeMar DeRozan scored 30 points and the Spurs opened on a 22-3 run before holding off the Celtics, 129-114. Boston pulled within 76-69 before Kemba Walker was hit with technical fouls and an automatic ejection in the third quarter, allowing LaMarcus Aldridge to hit two free throws. Gordon Hayward had 18 points for the Celtics, who have dropped two straight for just the third time this season.

Duncan Robinson provided 11 of his 17 points while the Heat outscored the Pacers 38-23 in the third quarter to pull away in a 122-108 victory at Indiana. Tyler Herro had a team-high 19 points for Miami, one more than Bam Adebayo and Derrick Jones. Pacers forward Domantas Sabonis finished with 27 points and 14 rebounds for his 30th double-double of the season.

Serge Ibaka dropped in 23 points, grabbed 11 boards and drained two free throws with 5.1 seconds left in overtime to secure the Raptors’ 112-110 victory at Charlotte. Terence Davis also had 23 points and 11 boards as Toronto avoided taking losses on back-to-back nights for the first time since Dec. 26-27, 2017. Terry Rozier led the Hornets with 27 points, but his 3-pointer at the buzzer in overtime fell short.

The Rockets pulled out a 122-115 triumph against the Hawks as James Harden provided 41 points, 11 rebounds and 11 assists for his second straight triple-double. Harden sank four straight free throws with 10.4 seconds left to clinch it. Clint Capela had 22 points and 22 rebounds, while Ben McLemore chipped in 18 points in Houston's third straight win.

Emmanuel Mudiay scored a season-high 20 points against his former team to help the Jazz post their seventh consecutive win, 128-104 against the Knicks. Rudy Gobert added 16 points and 16 rebounds, Bojan Bogdanovic also scored 20 points and Donovan Mitchell had 16 in limited minutes for Utah.

The Pelicans won for the seventh time in 10 games as Brandon Ingram had 29 points, 11 assists and eight rebounds in a 123-108 whipping of the Bulls. JJ Redick hit six 3-pointers on his way to 24 points, while rookie Jaxson Hayes had 14 points, 12 rebounds and four blocks for New Orleans.

Nikola Vucevic scored 29 points and Evan Fournier added 19 in the Magic’s 123-89 thumping of the Wizards. Orlando trailed by one before closing the first half on a 23-5 spurt. 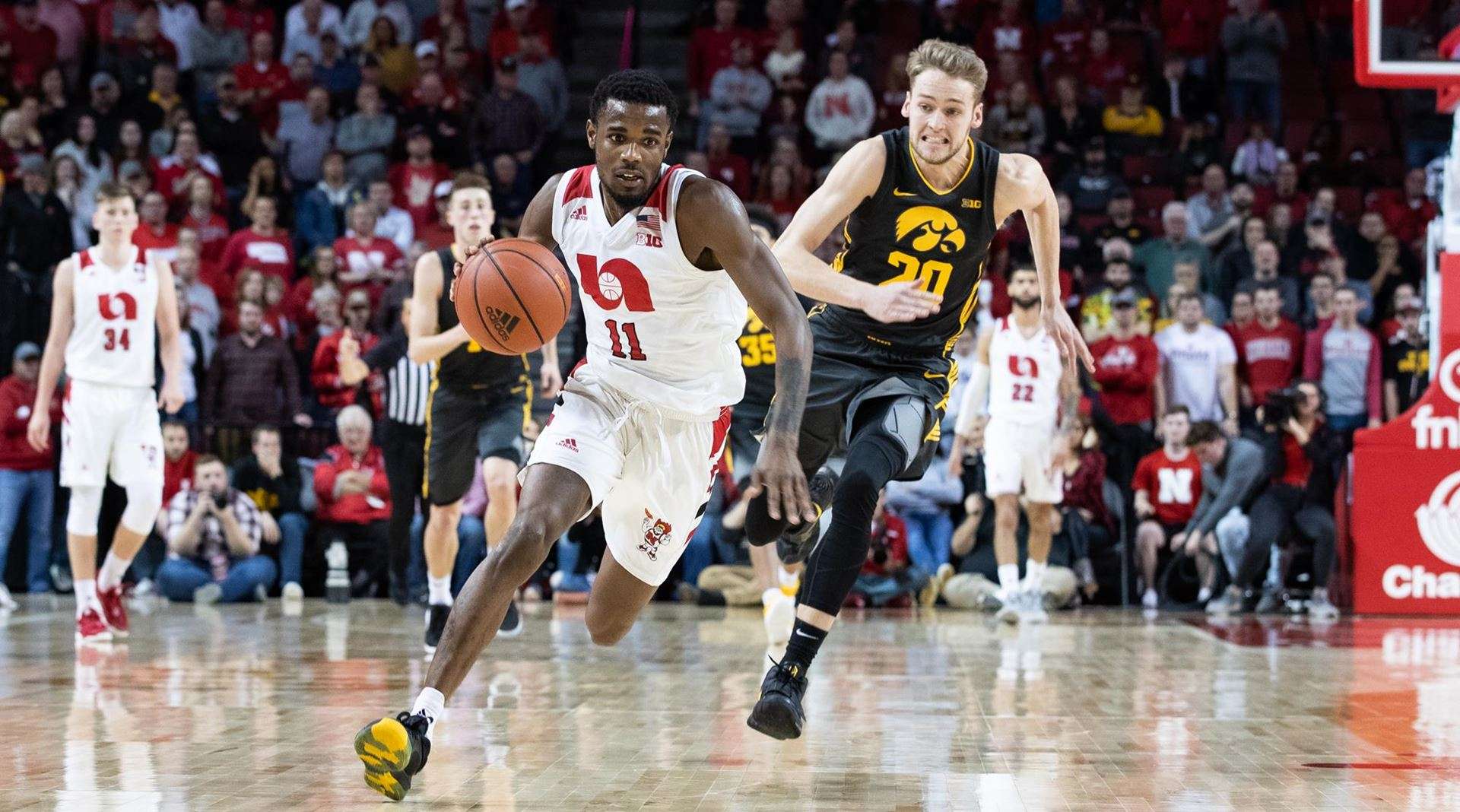 Lincoln, Neb. - Cam Mack had his fourth double-double of the season, while Thorir Thorbjarnarson tied his career high with 17 points to lead Nebraska to a 76-70 victory over Iowa Tuesday night at Pinnacle Bank Arena.

Mack poured in 15 points and dished out 10 assists for Nebraska (7-8, 2-2 Big Ten), as the Huskers put five players in double figures in posting their fourth straight win over the Hawkeyes in Lincoln. Mack has produced three of his double-doubles in conference play and had 10 assists and just one turnover in 39 minutes on Tuesday.

Iowa chipped away, pulling even at 59-all after a Joe Wieskamp basket with 5:20 remaining, but Thorbjarnarson's two 3-pointers keyed another 8-2 run to push the lead to back to 67-61, and the Huskers held on down the stretch.

Wieskamp finished with a game-high 21 points, while Luka Garza added 16 points and 18 rebounds, but Nebraska held the All-America candidate below his Big Ten leading scoring average. The Huskers also limited Iowa to just 4-of-33 from 3-point range, while hitting 10 3-pointers.

Nebraska opened the game on a 7-0 run and Iowa responded with a 7-0 run of their own to knot the game up at 7-7. The teams traded buckets before the Huskers went on another 8-0 run, featuring triples by Mack and Cheatham and a jumper from Thorbjarnarson to give Nebraska the 17-9 edge midway through the first half. Iowa was able to cut the Nebraska lead down to seven (38-31) by intermission, despite missing 12 consecutive three-pointers in the first half.

Iowa began pounding the ball down low in the opening minutes of the second half and brought the Husker lead down to two at the 15-minute mark. Mack then buried back-to-back jumpers to push the margin back to six and give the Huskers a 47-41 advantage at the first media timeout of the period. The teams continued battling ,and the Hawkeyes claimed a 51-50 lead after a Luka Garza layup and a Joe Wieskamp basket from beyond the arc with 12:41 remaining in the contest.

The Huskers continue Big Ten play Saturday afternoon when they take on Northwestern in Evanston, Ill. at 2:30 p.m. (MT).

The game will be televised on BTN and carried on the Learfield IMG College Husker Sports Network.