NEW YORK (AP) — People familiar with the discussions tell The Associated Press that Major League Baseball is likely to cancel the rest of its spring training game schedule due to the coronavirus and probably will announce that the start of the season will be delayed. The people spoke to the AP on condition of anonymity because no decision had been announced. They said baseball Commissioner Rob Manfred planned a conference call with his executive council to discuss the situation and then a call with controlling owners of the 30 clubs. An announcement would follow. The season had been scheduled to start March 26.

MIAMI (AP) — The NBA has suspended its season “until further notice" after a Utah Jazz player tested positive Wednesday for the coronavirus, a move that came only hours after the majority of the league's owners were leaning toward playing games without fans in arenas.

Now there will be no games at all, at least for the time being. A person with knowledge of the situation said the Jazz player who tested positive was center Rudy Gobert.

The league says it will use the hiatus to determine next steps for moving forward regarding the pandemic.

In a bizarre circumstance, the test result was reported shortly before the scheduled tip-off of the Jazz-Thunder game in Oklahoma City. Players were on the floor for warmups and the opening tip was moments away when they were sent to their locker rooms. Fans were told about 30 minutes later that the game was postponed “due to unforeseen circumstances."

Wednesday’s Pelicans-Kings game also was postponed right before tip-off with fans in the stands and ESPN promoting the game coming up on TV, due to the virus. The league says the game was postponed “out of an abundance of caution because one of the referees assigned to work in the game also worked a Utah Jazz game earlier this week.

The NBA became the first major American sports league to suspend play because of the coronavirus pandemic, raising questions about the future of college basketball's March Madness and other pro sports. It looked as if the NBA might be moving toward playing in empty arenas before it announced that a Utah Jazz player tested positive for the coronavirus and it had decided press pause on its season. NCAA President Mark Emmert announced earlier in the day that only essential staff and limited family will be allowed to attend the upcoming NCAA basketball tournaments.

Several college basketball conference tournaments have been canceled moments before tipoff, putting the NCAA Tournament at risk. The Big Ten, Big 12 and the SEC tournaments announced they were off, and other conferences were expected to follow suit. The men's NCAA Tournament is one of the most popular events on the American sports calendar. March Madness draws hundreds of thousands of fans to arenas from coast to coast.

Previous Article: Conference Tournaments Will Finish Out This Week - No Fans Allowed

Each of the Power Five basketball tournaments will proceed without fans beginning with Thursday's games. ACC games will be played only with teams, player guests, limited school administrators and credentialed media present. Big 12 squads will be allowed 125 tickets on a game-by-game basis beginning with Thursday's quarterfinals. Big Ten attendance will be limited to team personnel, conference staff, TV network partners, credentialed media and immediate family members of the participating teams. The SEC also says fans will be kept out of all regular-season events on its campuses and other league championships through at least March 30.

The Ivy League has canceled all spring sports, as many of its schools told students not to return from spring break and prepare for classes to be taught online. The league already had canceled its men's and women's basketball tournaments.

The Mariners are moving their first two series out of Seattle in an effort to slow the coronavirus outbreak. The Mariners and Major League Baseball have not announced where they will play the team's season-opening, four-game series against the Texas Rangers scheduled for March 26-29.

Chadron State softball games will be played - No Fans Allowed

Chadron State will play a softball series Saturday and Sunday in Denver against MSU-Denver.  The school says fans will not be allowed to attend those games.  Colorado School of Mines is taking a similar measure for its home athletic events in Golden immediately as well.

From the Chadron State Athletics website on a change in attendance policy for the Division II National Championship wrestling event, which three Eagles have qualified for:

In an update late Wednesday, NCAA staff clarified that at its Division II Wrestling Championships in Sioux Falls, South Dakota, public admission would be modified as follows:

Major League Soccer is shutting down for 30 days because of the coronavirus, delaying the home opener for the expansion team co-owned by former England captain David Beckham. MLS Commissioner says the decision was based on advice and guidance from the Centers for Disease Control and Prevention, Public Health Agency of Canada and other public health authorities. Beckham and Jorge Mas co-own Inter Miami, which had been scheduled to play its home opener Saturday. MLS started its season on Feb. 29 and each of the 26 teams has played two league matches. 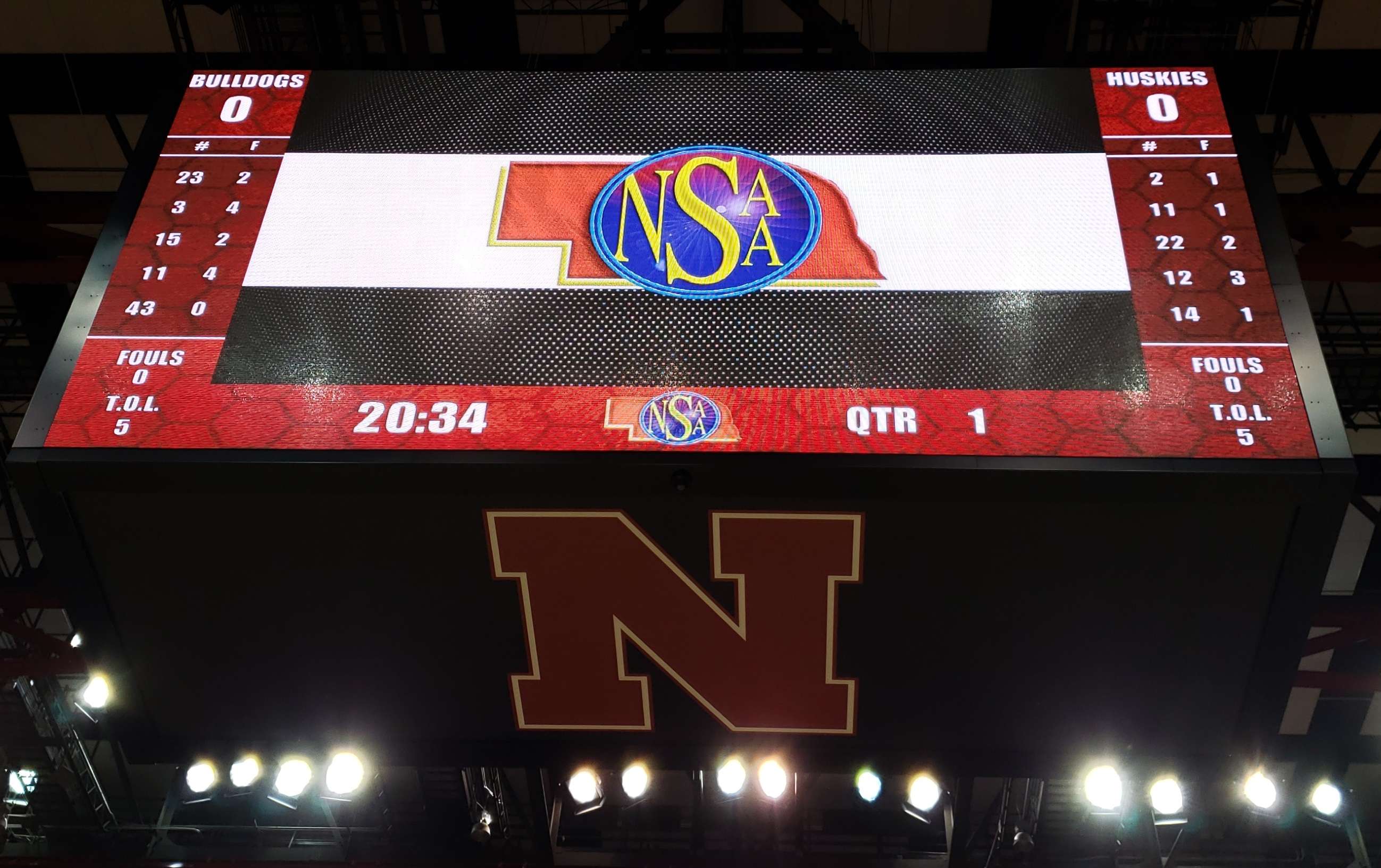 1st Round Notes: Alliance jumped out to an early lead 13-5 after a quarter...Scottsbluff put together a huge second half, especially in the fourth quarter with a 22-11 run...Scottsbluff's Dawson Mohr led with 15 points and hit two threes in the 4th quarter....Chance Parker scored 14, Jasiya DeOllos scored 12 points for Scottsbluff...Alliance was paced by Trevor DuBray's 15 points, 10 coming in the opening quarter...Scottsbluff won the season series over the Bulldogs 4-0...

This is the fourth time Alliance and Scottsbluff will face each other on the court this season, the first three went to the Bearcats by 16 in the season-opening Western Conference Tournament, by nine at Scottsbluff in early February, and 11 points in the B-8 subdistrict finals.

Almost every fan I talk to likes to see fresh opponents at state, but the Panhandle match-up at this point isn't unusual for Scottsbluff.  Over the past dozen seasons Scottsbluff has faced Sidney twice, in 2009 and 2015.  It happens to western schools across other sports as well, seemingly at least once every couple years.

If Alliance can move on they'll be in the mix for its second state championship (2001) and will be back into the semifinals for the first time since 2017 after bowing out to Aurora in last season's opener.

Scottsbluff has been a tournament mainstay over the years and makes its 42nd trip in 2020.  The Bearcats are looking for a 5th state title and first since 2012.  Last year the Bearcats were ousted by Lincoln Pius X 83-43 in the opener.

1st Round Notes:  Ogallala had four scorers in double figures led by Carter Brown's 19 points...Brown was potent in the fourth quarter with 11 points to help the Indians outscore the Stars by 10 in the final period...Clayton Murphy and Adam Kroeger each scored 15.

The Ogallala Indians are back at state for the third straight season and looking to take the title after finishing in 3rd place in 2019.  After two seasons away, Kearney Catholic is back at state hoping to advance out of the first round for the first time since 2004.

Ogallala (21-4) has a nice club with senior guards Carter Brown (17.6 ppg) and Clayton Murphy (8.3 ppg) who also provide length defensively. Six-five junior Kadyn Marhenke is second in scoring (14.6 ppg) and will team with senior 6'4" Adam Kroeger (10.8 ppg) to provide the offensive punch inside.

The Indians earned their trip to Lincoln with a 76-51 district finals victory over Battle Creek and have won four in a row overall.

Kearney Catholic (18-7) is on a three-game winning streak and are champions of the C1-8 district with a 39-28 grinder over Bishop Neumann.

The Stars rely heavily on 6'3" sophomore Brett Mahoney to provide the bulk of the scoring inside (16.0 ppg) and team him with senior guard Logan O'Brien (10.6) in the backcourt.

1st Round Notes: Mullen escaped from a close game throughout to knock out the Cardinals with Bryce Wright scoring a team-high 18 points, including eight in the second quarter...Brenden Walker had 11 for the Broncos...

The Mullen Broncos will try and win a second state championship since 2017 but draw a tough opponent in St. Mary's in the D2 bracket.

Mullen (21-5) comes in hot with a seven-game win streak following a blowout over Exeter-Milligan in the D2-4 district championship.  This is Mullen's 16th state appearance and first time back since 2018 - a 3rd place finish.

St. Mary's will have its defensive hands full with five scoring options presented by a balanced Mullen attack.  Junior guard Brendon Walker leads the bunch at 14.9 ppg.  In the paint, 6'2" freshman Clayton Moore scores 11.9 a game.  The Broncos will also feature 6'3" sophomore Jaden Emerson (8.7 ppg) and 6'2" junior Bryce McIntosh (7.2 ppg).  Rounding out the group is sophomore guard Trevor Kuncl (11.2 ppg) and Mullen looks set-up not only for a potential title run this year, but to also challenge for state berths in the next two years moving forward.

St. Mary's doesn't provide statistics to the NSAA or media, so I guess it's a mystery to most fans as to what the Broncos will see.  Mullen Head Coach Brad Wright surely will find plenty of film and coaching friends across the state to help him scout the Cards and prepare for Thursday's opener.