AHS to induct 4 new members to Activities Hall of Fame

The Alliance High School Activities Hall of Fame will induct 4 new members in 2020.

The Activities Hall of Fame is organized as a way of maintaining the rich heritage and tradition of the successful activity programs at Alliance High School. The Hall of Fame will serve as a means of recognizing, preserving, and honoring the athletes, performers, coaches, sponsors, directors, contributors and alumni who made significant contributions to activity programs. The Activities Hall of Fame will help maintain the spirit, pride, and sense of community, as well as serving as a historical account of the great activity traditions of Alliance High School.

1972 graduate Dennis Girard: Dennis was a 2-time State Wrestling champion in 1971 and 72. He is one of only 4, 2-time wrestling champions in Alliance history. Dennis is also one of only 2 Alliance wrestlers to receive All-American honors in high school. He was also a member of the 1971 state cross country championship team and went on to wrestle at the University of Nebraska.

1994 Graduate Chad Thompson:  Chad was a 3 year starter at receiver in Football and is the single season and career receiving leader at AHS.  He was also a 4 year letter winnerin both Basketball and Track and Field. He started for the 1994 State qualifing team in Basketball and was a State Medalist in Track and Field. He went on to play football at the University of Nebraska-Kearney.

1989 Graduate Jamie Tomlin: Jamie was a 3 sport athlete at AHS earning letters in Cross Country, Basketball and Track and Field. He was a 2-time All State selection in basketball and is the AHS all time leading scorer at AHS boys basketball with 1439 career points.  He was a starter on 2 State qualifing teams and a member of the 1989 team that set the Nebraska single season scoring record averaging 94.4 points per game. Jamie was also a state qualifier in Track and Field. He went on to play college basketball at WNCC and the Univeristy of Nebraska-Kearney.

The 4 honorees will inducted into the AHS Activities Hall of Fame this spring. 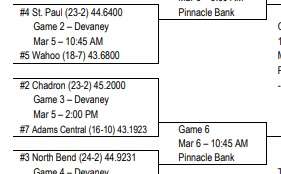 A pair of teams that were in last year's Class B tournament will meet this year in the opening round.  Sidney dropped a 51-37 decision to Elkhorn South, the 10th consecutive opening round loss for the Lady Raiders, while Grand Island Northwest went on to win its fourth state championship.

Sidney and Northwest met in the 2014 tourney, a 65-44 GINW win on its way to a state title, which was also the last time the Vikings had gone to state before last season's championship run.

Sidney comes into state with a 19-6 mark and a district championship win over the Blair Bears, grinding out a season-low of points in a victory, 34-28.

GINW is 21-5 and enters on a six-game winning streak, champions of the B4 district with a 57-41 win over Omaha Mercy.

The Vikings have four upperclassmen players who can break out and score, led by senior guard Whitney Brown (17.8 ppg) and senior forward Lauren Hauser (10 ppg).

Preview: The Scottsbluff Bearcats are making their fifth trip to state basketball, and first since 2016.  Bennington hasn't been in 11 years and also makes its fifth state appearance in school history.

After taking down rival Sidney in the sub-district finals Scottsbluff (16-10) handed Omaha Gross Catholic a rout in the B-6 championship 62-49 to come into state with a four-game winning streak.

Bennington has won seven consecutive games and took down Omaha Skutt Catholic in the B-3 finals by 22, not a huge surprise seeing as Skutt finished 6-19 on the year.

Senior guard Yara Garcia will be crucial for the Bearcats.  The Cats leading scorer (16.2 ppg) and rebounder (5.53 rpg) will have to stay out of foul trouble and find success against a Badger defense that surely will be looking to stop her first.

Guards Aubrey Krentz and Payton Burda are part of a deep Bearcat backcourt and hope to take some of the burden off Garcia.

Game Notes:  Chadron's Olivia Reed led the Cardinals in scoring with 13 points...Chadron suffered through a scoring drought in the second and third quarters with just eight total points...The Cardinals season ends at 23-3.

Chadron is back in the state basketball mix for the first time since 2016 and looking for its second title (C1/2000).

The 23-win Cardinals have just two setbacks this year and come in with a nine-game winning streak as champions of the C1-2 district.

Adams Central can't match those numbers (16-10) but did play a challenging schedule and defeated 23-3 Broken Bow in the district finals 52-37.

Youth in the paint will be a strength for Chadron. Sophomore 6'0" forward Olivia Reed will be a load for the Patriots defense to handle, she's scoring 17 a game to go along with seven rebounds.  Freshman Anika Burke is 6'3" and scores 5.4 points with about four rebounds a night.

Adams Central will counter with a young post talent of its own, 6'2" freshman Rachel Goodon (6.1 ppg, 7.4 rpg). Senior Kylie Dierks will help in the post (8.4 ppg, 5.5 rpg) and the Patriots backcourt leaders of Bryn Lang and Jessica Babcock put up 18.6 points a game.

The Mullen Broncos are making their fourth state basketball tournament appearance in school history and are headed back for the second consecutive year.

Last year in the first round the Broncos were clipped by Bruning-Davenport-Shickley (BDS), the very team the Broncos face in this year's opening round...Mullen led 30-24 heading into the fourth quarter before BDS put together a 12-4 run to advance to the semifinals in 2019.

Mullen will rely on the backcourt of junior guard Samantha Moore and sophomore Taylor Svoboda who combine to score almost 27 points per game.

That pair is familiar with the match-up and Moore led the Broncos with 11 points at state in 2019; Svoboda chipped in seven.

BDS will count on 5'11" senior forward Regan Alfs and junior Macy Kamler at guard who combine for 15.2 ppg, and add in senior guard Rylee Haeker's 8.2 ppg for a third option.

Alfs and Kamler scored 20 for BDS in last year's State win over Mullen, while Haeker is a new addition as a senior that the Broncos haven't seen.

The 25-1 Broncos are coming into the tournament hot, on an eight-game winning streak after cruising by Leyton in the D2-3 district championship by 27 points.  Mullen's only setback came to 21-3 C2 school South Loup in early February.