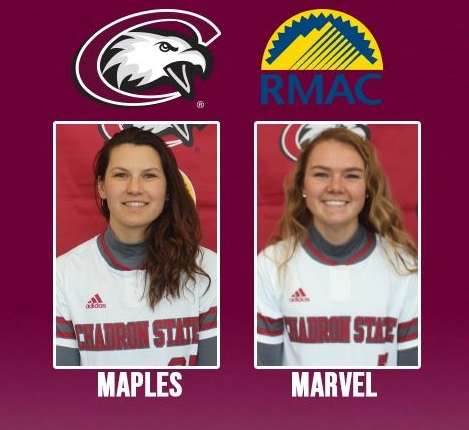 CHADRON, Neb. -- April 15, 2020 -- Chadron State College softball players Angelica Maples and Bailey Marvel were among the players honored Wednesday by the Rocky Mountain Athletic Conference for their work in the classroom. The pair were named to the league's academic honor roll in the annual All-Academic release.

Those student-athletes who met the minimum requirements for nomination to the All-Academic First Team, but who were not selected by the league's sports information directors, earn recognition on the honor roll.

Minimum qualifications include a 3.3 cumulative grade point average, at least two full semesters' worth of academic credit at current school, and the student-athlete must use a season of eligibility.

For this season, which ended early due to a virus outbreak, career accomplishments were considered, in addition to season statistics.

Maples, who holds a 3.376 GPA  in criminal justice, is a three-year starter, first in the infield then in outfield mostly the past two seasons. The senior from Marysville, Calif., led CSC in home runs as a sophomore, with six, and was leading again this season with four. Maples was tied at ninth in RMAC for home runs when the season ended and was having a career season at the plate batting .288. She ranks seventh all-time at CSC in stolen bases (21).

Marvel, a sophomore from Lakewood, Colo., batted .396 as a freshman and was at a clip of .351 this season for a career average of .383. She led the team in stolen bases both seasons, with a career 21 steals, and scored the most runs both seasons with 62 combined. Marvel has started all 72 games of her career at shortstop, accruing only eight errors to her name for a stellar .967 career in the field. With a GPA of 3.673, she owns the second-highest career batting average and on-base percentage in CSC history.

The RMAC Academic Player of the Year award went to Hailey Hinson of Colorado Mesa University.